Where our Members Live - Norleywood 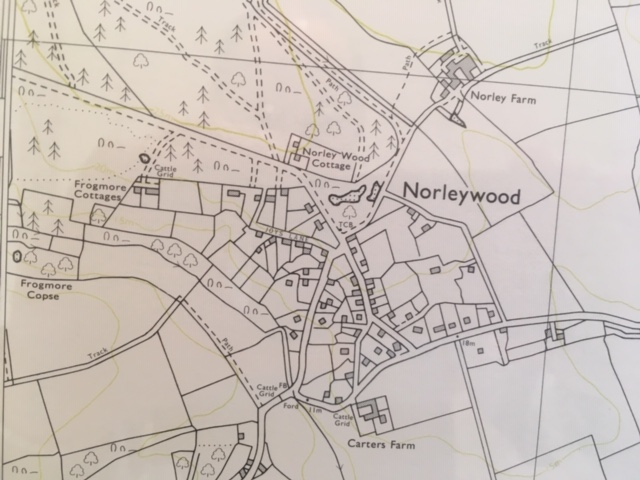 Sue and I live in Norleywood in the south east of the New Forest in an area of historic landscape and settlement.

Lying within the New Forest National Park, Norleywood is two miles east of the river estuary at Lymington within the parish of Boldre. From the B3054 (the Lymington to Beaulieu road) at Bull Hill, it is often referred to by locals as being “Our side of the Crossroads” to distinguish it from nearby hamlets of Pilley and Boldre to the north.

The area is surrounded by open heathland, ‘Beaulieu Rails’ and the Solent foreshore to the south. The nearby expanse of Beaulieu Heath was home to the Royal Flying Corps (RFC Beaulieu) at East Boldre in World War 1 and later the World War II Beaulieu Aerodrome which played a significant role in the preparation for the D-Day invasion.

The civil parish of Boldre is made up of some twelve smaller settlements stretching from Sandy Down and Battramsley to East End and Walhampton, with Boldre and Pilley as the central core.

The area comprises a mosaic of pockets of ancient forest, commoners’ small holdings, the larger fields of the country estates on the southern shore, linear settlements and scattered farmsteads.

Only part of the surrounding land is open to grazing of forest stock (including the foreshore). Commoning has been a way for life for hundreds of years with many properties carrying ancient forest rights. Boldre still has more practising commoners than most other parishes and the names of old village families go back for centuries.

The place name Norley is referred to in documentary evidence in 1298 and is from the Olde English (or Anglo-Saxon) word meaning ‘north wood / clearing’. In 1306 Edward I granted one hundred acres of waste land at Norley (‘Northlegh by Baddesley’) to Hugh de Ristone.

On approaching the locality, we see landscape typical of the New Forest, comprising heathland, mire and pasture woodland. The settlement of Norleywood was formed originally by a small number of scattered dwellings encroaching on to Norley Wood - an area of wooded heathland which in 1810 was enclosed from the open Forest as a timber plantation to form ‘Norley Inclosure’. On the 1787 ‘Drivers’ Map of the area, the settlement is a small irregular scatter of cottages with paddocks, set around the roads.

[The ‘Drivers’ Map is so named after the parliamentary surveyors Richardson, King and Driver.]

Milne’s Hampshire Map of 1791 makes no reference to Norley Wood although the wooded heathland is clearly designated.

Jude James in his Comyn’s New Forest refers to Norley Wood in 1817 as “a very rural hamlet……the most notable feature [being] the large conifer enclosure made in the early nineteenth century”. This ‘enclosure’ shown by Comyn on his map was actually a statutory inclosure.

[An Inclosure is an area made ‘enclosed’ under various New Forest Acts for the growth of timber, where the rights of commoners are temporarily suspended and commonable stock are excluded].

The village pattern is quite clearly a ‘nucleated’ settlement with dwellings built around a central core at the road junction at the centre of the village, reflecting the original plot boundary pattern evident in earlier maps. The earliest surviving buildings date from the late 18th or early 19th century and are constructed of cob and thatched roofs. Later buildings from the end of the 19th century onwards is mainly brick with slate roofs. Norleywood is within the Forest South East conservation area of the New Forest National Park Authority.

Centre of the Village

Today, the hamlet of Norleywood has some 90 dwellings and a population of about 200 people.

The road junction at the centre of the village adjacent to the thatched Corner Cottage (one of our four Grade II listed buildings) forms an important focal point. Nearby is the small green and a red telephone box.

The telephone box is now, typically, a landmark rather than a means of communication! Delivery 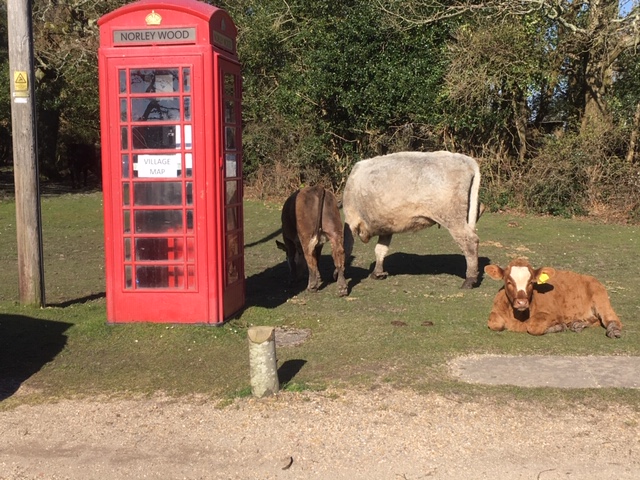 drivers, increasingly finding houses difficult to locate and on a poor mobile signal, contact customers with the greeting:  "I can't find you”. Where are you? “I’m beside the phone box". As a result, the disused box now contains a village map with all our house names and continues to provide a vital service to the outside world!

Life in the Village

Initially it would appear that Norleywood is a quiet, sleepy village – the silence occasionally broken by the noise of a mower, chainsaw or hedge trimmer; donkeys bray and pheasants squawk. An unkind friend once called it “Snorelywood”.

It is true we have no shop, no pub, no school, no church and no village hall. However, this gives a misleading picture of community life. Before coronavirus, we would drive to Pilley or East Boldre for our community shop or into Lymington; we have the excellent East End Arms across the fields; and there are two highly regarded junior/ infant schools nearby at South Baddesley.

The Church of St. Mary’s South Baddesley (one of two churches in the parish of Boldre) has an interesting history. The church came into existence in 1858, although it can trace its origins back to an ancient chantry chapel built in 1329 near what is now Pylewell House.

After the Weld family of Lulworth Dorset bought the Pylewell estate in the early 19th century, the village of South Baddesley, together with the route of the Lymington to East End Road, were ‘moved’ north away from Pylewell House and a new chapel built on the present site. In 1858, the chapel was endowed to become the church of the ecclesiastical parish of South Baddesley, East End and Norley Wood.

The Norleywood and District Society was established by local residents in 1970 to fight proposals from the Forestry Commission to place two caravan sites in the Norley Inclosure. It is still active today with the aim of creating friendship within the community and to get involved with local environmental issues. It has recently been vigilant in monitoring forest management and deforestation proposals by Forestry England in the Inclosure involving mire restoration, tree felling and thinning to permit natural regeneration of new trees.

A common feature of Norleywood is to see ponies, donkeys and cattle, roaming freely. The animals are creatures of habit with cattle returning to our neighbouring farmstead in the evening or ponies roaming from haunt to haunt, often in pairs or small groups. Foals are a delight to see in springtime.

Many properties in Norleywood have common rights attached. These common rights in the New Forest today comprise:  Common pasture (essentially grazing rights for cattle, ponies, donkeys and sheep); Mast (right to turn out pigs during the pannage season; and Estovers (free supply of fuelwood). Following the New Forest Act of 1949, those properties entitled to exercise common rights are set out in an Atlas of Forest Rights being the register maintained by the Verderers of the New Forest in Lyndhurst. Other ancient common rights no longer exercised are: Marl (right to dig clay to enhance agricultural land); and Turbary (right to cut peat turf for burning).

Our own land at The Bee Garden posesses the right of common pasture. We do not exercise our right but delight in the cattle, ponies, donkeys at our gate (but not in our garden, where they can do great damage!).

I will conclude with a piece of recent history;

For forty-four years from 1939 until 1983, Norleywood had a YHA Youth Hostel – one of only two in the New Forest.

Built of cedar wood, the hostel accommodated many travellers of all ages, most of whom had cycled through the forest. The building catered for 48 people, 24 men on one side and 24 ladies on the other with the Wardens’ quarters situated in the centre. Mr and Mrs Fred Smith, the uncle of our well-known Master Thatcher Derek Smith, were wardens for well over a third of the existence of the hostel. Mr and Mrs Smith won a competition for the best kept hostel in the South of England.

Adrian Smith, Derek’s son, carries on the thatching tradition in Norleywood to this day.