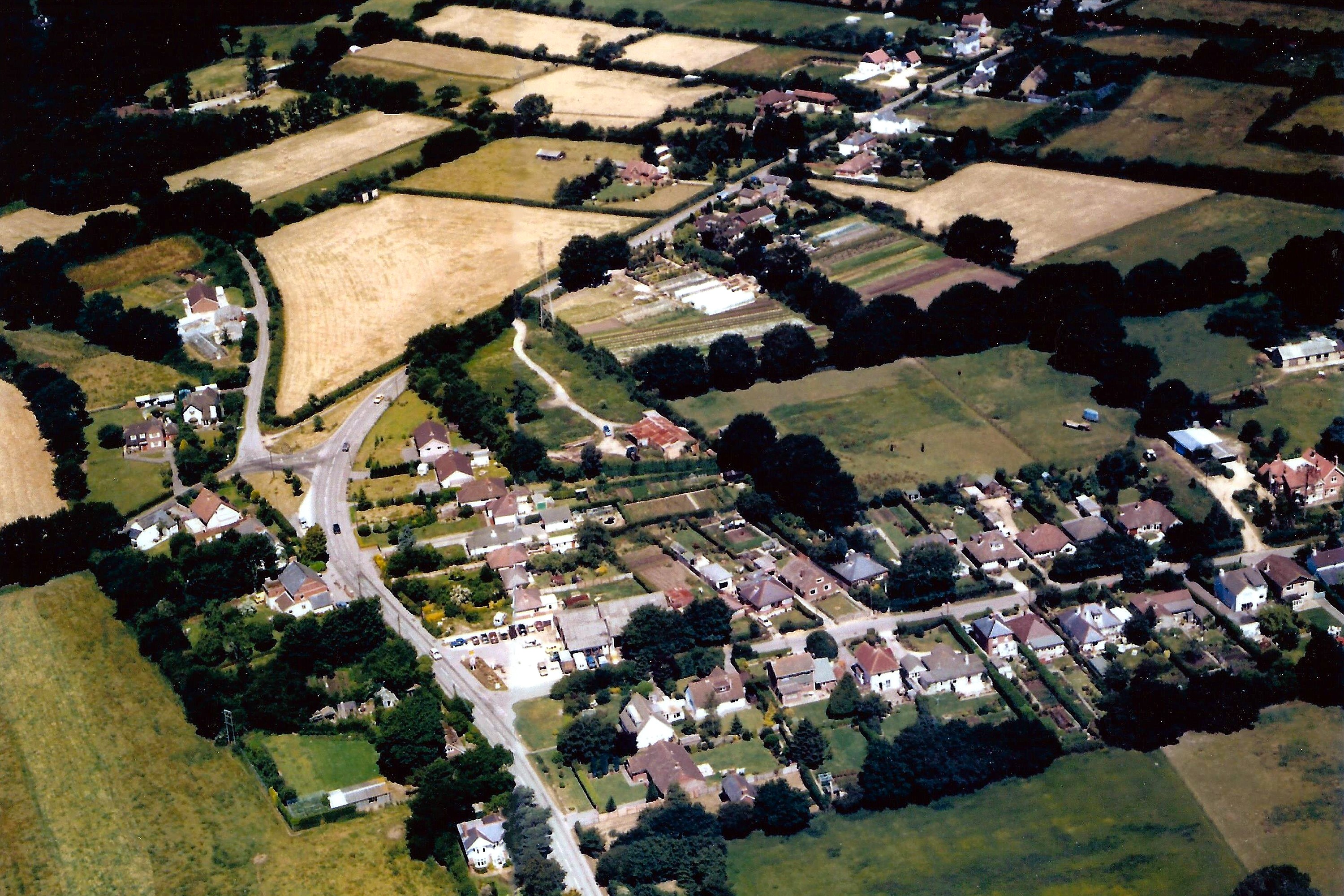 Bashley is located in Hampshire about 1 mile north of the market town of New Milton and 3 miles north of the coast at Barton-On-Sea. It straddles the B3058, which connects New Milton to the A35 and the rest of the country. It is the sort of village that if you blink you would miss it. In fact, as kids, Jill and I often used Bashley Cross Road to get from where we lived to beaches, but never realised there was a village until we moved back to the area, from Essex, in 2000.

When The New Forest National Park was established in March 2005, Bashley was incorporated into the area as its southernmost village. This completed a history of recorded land ownership, which dates back more than 900 years.

The first mention of the settlement appeared in The Domesday Book listed as Bailocheslei, which translates to “wood/clearing of Baegloc”. The name was still used in 1114 when records show it to be owned by Christchurch Priory, but had changed to Bailukesleia by 1152.

Records show the settlement changing ownership several times as the areas of control of Christchurch Priory and Winchester Cathedral changed. By 1606 Balloxley, as Bashley had become known, with 6 other surrounding manors were part of the Diocese of Winchester, which remains the case today. The first reference to the current spelling of Bashley appeared in 1664.

Bashley was never more than wooded forest and open common with a few dwellings but has witnessed many dramatic events throughout its existence. These include the Danes and Saxons fighting a battle to the east of the village, in what is now known as Wooton Rough, and Danestream; the stream which forms the border between Bashley and the next village of Tiptoe; is said to have turned red with blood.

Few, however, stir the imagination quite like the smuggling, which occurred in the late eighteenth century. At the time a labourer's wage was seven shillings (35p) a week so smuggling, or "Free Trading" as it was called, played an important part in peoples lives. High taxation combined with the general poverty of the working classes led to smuggling on a very large scale. There were many places for landing cargo and multiple routes, including via Bashley, to the shelter of the heavily wooded forest. Tea, brandy, silks, laces, spices, tobacco, pearls, wines and even the occasional aristocrat escaping the French Revolution, were smuggled into England using local beaches to arrive at the relative safety of the forest

Three well know local smugglers were Lovey, Peter and John Warne. Legend has it that, when the Revenue Men were around, Lovey Warne would parade across a local hill wearing a red cloak, as a warning to smugglers on the coast to avoid the area. At night smugglers living at a cottage on the hill would hoist a lantern up a nearby oak tree to give the warning signal. Lovey’s role in smuggling didn’t stop with signalling and the story goes that she would visit ships in Christchurch harbour, undress in the privacy of the captain's cabin, and wind herself with valuable silks before getting back into her clothes. Evidently the sudden gain in size passed unnoticed, since Lovey would walk straight past the Revenue Men without arousing suspicion.

The fate of Lovey and Peter is not recorded but John went down to the beach once too often and was shot by a Revenue Officer.

The area known as Bashley Common was enclosed in 1817 and much of the forest was cleared in the fight to stop smuggling. Bashley thus evolved into an area of common and farmland. Throughout its history, Bashley has been subject to Forest Law with very few buildings being allowed. Becoming part of the New Forest National Park continues this tradition.

One building that was allowed was a Baptist Chapel erected in 1864. The building still exists but is now a private residence named Missioners. The village also had its own pub, which was a wayside inn known as The Taverners. Again the building remains, but as a B&B with the name slightly changed to Taverners Cottage. Similarly, the old blacksmith’s shop remains as a private residence in Smithy Lane. The original village shop was in a cottage known as Homestead, doing a very good trade when the railway was being built from Brockenhurst to New Milton during 1887/88, selling goods to the Irish navvies who worked on the lines.

The current village shop and post office is in a house further north in the village and opposite the garage and petrol station. The local pub is now The Rising Sun, which has its garden and car park within the Bashley boundary but the pub itself in the neighbouring hamlet of Wooton.

There is the Village Hall which accommodates the local Women’s Institute, is home to the annual Bashley Flower Show and provides facilities for other regular events.

The existing church was built in 1907 and dedicated to St. John. It was built by the Lord of The Manor of Ossemsley, an old estate about 1 mile to the west of Bashley. The story goes that if the staff from the Manor walked to the Milton church; a distance of about 3 miles; on a Sunday, then they would not return from the service in time to prepare Sunday lunch at the Manor. The Lord did not want the church on his estate so built it on a spare piece of land at the end of a row of cottages on the south side of what is now St. John’s Road. The north side of the road was a dairy farm. The church originally had a wooden bell tower but this was removed some ten years ago as unsafe. The bell is now hung to the left of the entrance porch. St. John’s Church still serves the village and surrounds, celebrating its centenary with a flower festival in May 2007.

All of the farms were broken up in the early 1950’s and, with a few exceptions, retained as green belt. Thus the modern Bashley is low in population and private houses but high on country businesses and attractions. The land that was once the farm to the north of St. John’s Road is now a private house where Jill and I live, plus two garden centres; one specializing in trees and the other; until recently; annual plants and shrubs. Other land in Bashley became a third, general garden centre, the football ground, cricket field and home of Sammy Miller’s Motorcycle Museum, which many consider houses the finest collection of fully-restored motorcycles in Europe, many of them being extremely rare. The village has a Horse Riding Stables, Saw Mills, small country Hotel, large farm shop and is also home to one of Hoburne’s Holiday Parks. And there remains plenty of old trees and fields to maintain privacy.

Bashley Football Club was founded in 1947 joining the Bournemouth League in 1950, progressing through the ranks before leaving in 1983 to join the Hampshire League. In 1986 they became founder members of the Wessex League and won the title for the first three years they took part. In the 1987/88 season, Bashley came to national prominence after an incredible run in the FA Vase, which came to an end at the semi-final stage. In the 1994/95 season, Bashley reached the First Round proper of the FA Cup for the first time, and won 1-0 at Chesham to set up a Second Round tie with Swansea at the Bashley ground, losing 1-0. Bashley currently play in the Premier division of The British Gas Business League – South and West.

The Rydal Cricket Club was also formed in 1947 but did not move to its current ground in Bashley until 1979. The Club runs four teams as well as a number of junior sides. These teams play in various divisions of The Hampshire League. The first team was promoted to the elite ECB Southern Premier League Division 1 in 2000 winning the Premier League knock-out cup in the same year. The Club’s Bashley ground was voted the Premier League Ground of the Year in both 2001 & 2002.

So if you are ever in The New Forest look out for Bashley, and when you find it, feel free to ask somebody how to find me. The village is still small enough that everybody knows everybody!